We are honored to count on the participation of a Scientific Advisory Committee led by Prof. Ángel Carracedo. Professor Carracedo received his MD and PhD with honors from the University of Santiago de Compostela. He is the director of the Fundación Pública Galega de Medicina Xenómica, the reference genetics center from the Galician government and full Professor of legal and forensic medicine at the USC. He directed the Instituto de Medicina Legal, is director of the National Genotyping Center (Institut of Health Carlos III), and coordinates the U711 unit of the Center for Network Research on Rare Diseases (CIBERER).He has pioneered the introduction of genomic technologies, high-throughput genetics methods and pharmacogenetic analysis for clinical applications. His main research lines include rare hereditary diseases, pharmacogenomics, cancer genetics, cardiovascular and psychiatric diseases.

Prof. Carracedo has published 10 books and 470 papers in the main scientific journals on medical genetics, cancer and forensic genetics. Professor Carracedo is the author with more influencing publications in the area of forensic and legal medicine, and is among the highest cited researchers in clinical genetics and molecular biology in recent years. He has directed 72 PhD theses, all of which received the highest qualification. He is a board member of national and international societies of forensic medicine, medical genetics, pharmacogenomics and cancer. He participates in regulatory organisms and international consortia such as the EMA, Forensic DNA Regulator UK, DNA ISFG Commission, and International Rare Disease Research Consortium (IRDiRC). He is editor of the journal Forensic Science International: Genetics (highest impact forensics journal) and member of the editorial board of 15 international journals on genetics and legal medicine. He was president and is currently vice-president of the Spanish Society of Pharmacogenetics and Pharmacogenomics. He received many awards and recognitions, including the Galician Golden Medal, the King Jaime I Research Award, Adelaide Medal, Galien Medal, Galician Research Award, Castelao Medal, Novoa Santos Award, PoliceMerit Award, Guardia Civil Merit Award, Fernández Latorre Award, Prisma Award and Galicians in the World Award, among others. He has been granted honoris causa doctorate by several unives. 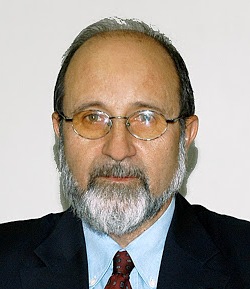 Graduate in Philosophy, PhD in medicine and specialist in Neurology, Prof. García de Yébenes received training at the universities Autónoma de Barcelona and Autónoma de Madrid, University of Virginia and Columbia (USA), University of Göteborg (Sweden), and training periods in London, Gröningen, Leipzig and Strasbourg. He has worked at the hospitals of Santa Creu i Sant Pau, Fundación Jiménez Díaz and Ramón y Cajal. Full professor of Neurology at the Universidad Autónoma de Madrid, founder of the tissue bank for research on neurological disorders and its laboratory of molecular diagnosis. He has authored around 300 scientific papers and has received prestigious prizes, such as the King Jaime I and the Medal to Merit in Health from Castilla La Mancha. He was coordinator of the Neurochemistry and Neuropharmacology group, as well as president of the Spanish Society of Neurology (SEN). He was also president of the Foundation for Neurological Research, patron of the Spanish Foundation for Neurological Disorders, board member of European Huntington’s Disease Network and the European Dystonia Network. He promoted the CIEN network and the Center for Network Research on Neurodegenerative Disorders (CIBERNED).

He has participated in the High Consultive Council of the Generalitat de Valencia, Global Counseling Committee of Boeringher-Pharmacia-Upjohn, CRECE commission for reflections and study of Science, Confederation of Scientific Societies (COSCE), commission on genetics and biobanks of the Institute of Health Carlos III and the National DNA Bank. Coordinator of research evaluations on Biotechnology in Science and Technology, Health Research Institute and European Commission, as well as for Italy and Colombia. He is a member of the editorial board and reviewer for numerous scientific journals in Neurology and other fields.

Prof. García de Yébenes was founder of the Spanish Parkinson Association, the Huntington Chorea Association of Spain (ACHE), and Spanish Association Against Dystonia (ALDE). He was a promoter of the "Madrid Declaration", a catalog of aspirations of patients with neurological disorders to the highest governmental offices. He also promoted and directed the National Strategic Plan for the Integral Treatment of Neurological Diseases (PENTIEN). He has published dissemination monographies on neurological disorders (“Amamí, Alfredo y otras historias clínicas”, “La Vía Láctea”, “Los alimentos y las enfermedades del sistema nervioso”), institutional texts (“Sermones Profanos”), reflections on the health system (“David y Goliat”) and has participated in numerous divulgative programs on radio and television. He keeps a blog on health problems and the health system, “El cuaderno gris”.

Prof. Arias graduated in Medicine from the University of Santiago de Compostela in 1979 with the Graduation Extraordinary Award. He obtained his doctorate in 1984 with Honors. He is head of one of the neurology sections at the Hospital Clínico Universitario de Santiago. In this city he has developed an extensive career at the service of patients with neurological diseases, with special dedication to degenerative and inherited conditions, as well as inflammatory and immunological disorders of the nervous system. He has participated in numerous clinical trials and registries. His publications have a clinical and translational character, contributing to dissemination of knowledge in neurology, to improve diagnostic protocols and management of neurological diseases. Some of the conditions studied in his works include ataxias, muscular disorders, encephalitis and autoimmune neurological syndromes. He has also studied neuropsychiatric manifestations and the disorders at the border between Neurology and Psychiatry.

Dr. Arias is Associate Professor of the School of Medicine at the University of Santiago de Compostela. He also teaches neurologists in training at a diversity of programs on neuro-ophtalmology, epilepsy, semiology and neurological examination, neurological emergencies, history of neurology, bioethics and nursing. His works received several awards from the Real Academia de Medicina y Cirugía de Galicia. He is a member of the Health Ethics Committee of the area of Santiago. He is editor of Adiante and reviewer for numerous journals in the fields of neurology and psychiatry. He was board member of the Spanish Neurology Society and the Galician Neurology Society. He belongs to the History of Neurology Study Group and is a Corresponding Member of the Real Academia de Medicina y Cirugía de Galicia. In addition, he is a founding member of the Chamber Music Group of the University of Santiago de Compostela and the group Milladoiro, with several albums recorded. 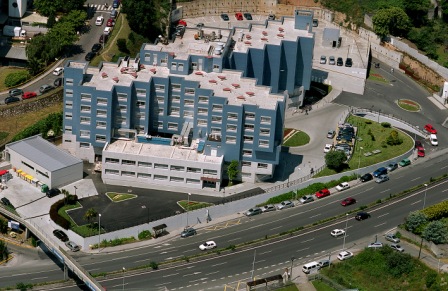 The San Rafael Hospital in A Coruña is our partner for conventional, face-to-face appointments on medical genomics. It is a private center serving society since 1969 and covering all medical and surgical specialties. Its mission is aimed at excellence in healthcare, its hallmarks being the best professionals, technological innovation and personalized care. Linked to that vision and in order to guarantee the best medical services, the hospital develops academic training programs in collaboration with the Universidade de A Coruña. For over three decades it has presented the Rafael Hervada Award on Biomedical Research as a contribution to the advancement of science, in remembrance and honor of its founder Dr. Hervada. The director of Telegenomics, Dr. Sobrido, coordinates the neurology department in the San Rafael Hospital since 2003. 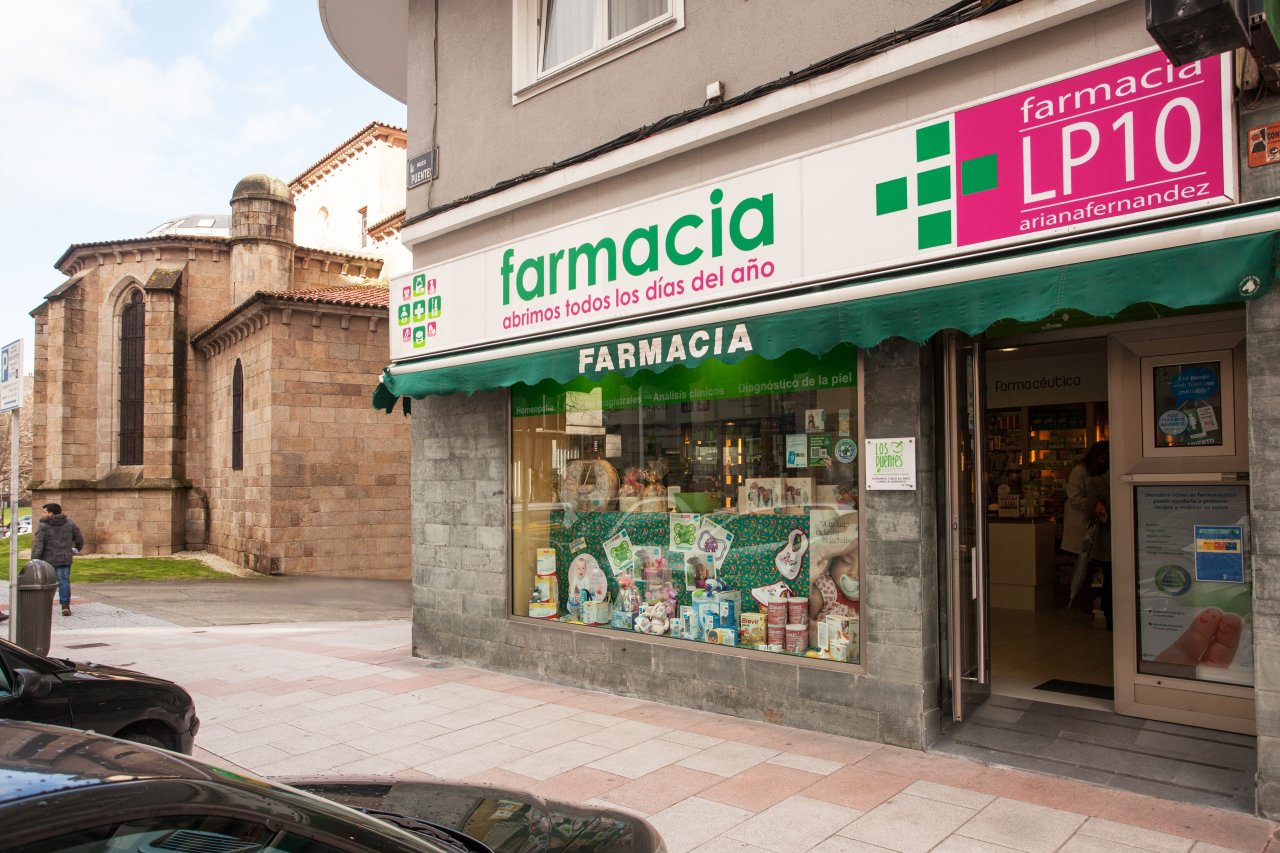 LP10 pharmacy is located in Paseo de Los Puentes, A Coruña and its head pharmacist is Ariana Fernández Palomo. With a focus in personalized pharmaceutical treatments, LP10 offers a broad service catalogue that goes beyond drug dispensation and compounding formulation. They have developed their own specialized dermo-cosmetics brand. Their services portfolio includes blood and biochemical analyses such as haemoglobin, cholesterol, triglycerides, glucose, uric acid, kidney and liver function, as well as specific analyses such as PSA, blood group, skin and hair evaluation. LP10 provides continuing pharmaceutical care to prevent side effects in patients under multiple medications due to chronic disorders, such as diabetes, kidney problems, heart disease, or those who are on anticoagulants. The future of pharmaceutical innovation involves pharmacogenetics, whereby the pharmacy must play a key role in healthcare, in close proximity to the patients. LP10 pharmacy offers the necessary bridge between the user and a specialist team in medical genetics. The application of pharmacogenetics will help optimize drug type and dosage for each specific individual, thus minimizing adverse events and maximizing treatment efficiency.

We use our own and third party cookies to improve our services. If you keep on browsing, we assume that you accept its use. You can get more information here